As of 2019, around 2.5 million Australians, more than 12% of the population, were vegetarian. And roughly 500,000 of them have gone totally plant-based with a vegan diet. This isn’t just a trend in Australia either, the number of vegans in the USA for example, grew from 4 million in 2014, to 20 million in 2018 – that’s 600% growth! All of this growth has also meant more vegan alternatives have been cropping up, with 8.7% of new products in Australia being vegan or free from animal products. Even your favourite fast-food restaurants have launched vegan options.

Of course, this worldwide growth in popularity has meant that entirely plant-based restaurants have also been opening, and Australia has definitely jumped on that trend. There are tonnes of new plant-based restaurants that have popped up over the last few years, all with incredibly tasty food, making it tough to pick which one you should try first.

So, we thought we’d help you out. We’ve ranked Australia 20 biggest cities according to how many vegan restaurants, cafes, and health food stores they have, as well as related web traffic and search volume. 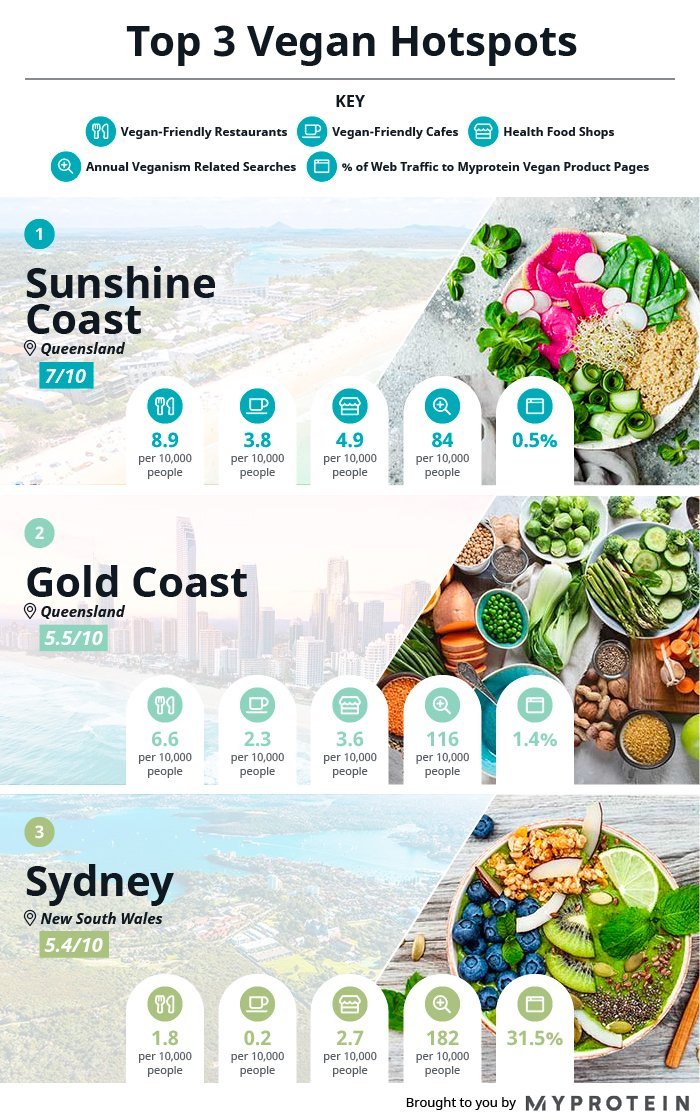 We’re staying in Queensland with number two on the list, just the other side of Brisbane with The Gold Coast. With another high ranking for the number of vegan-friendly restaurants and cafés and more arriving consistently. There are also a pretty high number of people here turning to Google to learn about veganism (116 per 10,000 people), suggesting the number of vegan or at least plant-based residents could also be on the rise.

Of course, Sydney has made the cut for this list as the country’s biggest city with a flourishing vegan community.

Sydney has a huge population of 5 million people, and still manages to score highly on the vegan-friendly scale, being the city with the most vegan establishments.

We dove deep into Australia’s 20 biggest cities to get the answers for vegans across the country; which city is best for plant-powered people? As expected, many of the state capitals ranked pretty highly, but you might be surprised by where some of the other landed on this list…

The population of the Sunshine Coast is only 341,000, but its residents get to choose from 305 vegan-friendly restaurants (roughly 8 per 10,000 people). This allows it to claim the crown of highest number of vegan restaurants out of any of Australia’s biggest cities.

Ok…we’re seeing a theme here. The Sunshine Coast also came out of top as the place with the highest concentration of vegan-friendly cafes (3.8 per 10,000 people), 128 in total.

Alright, alright, the Sunshine Coast has definitely earned its place as Australia’s vegan hotspot. Taking the crown of the most health-food shops per person as well, we’re confident any vegan would feel at home here.

In this category too, it wasn’t the bigger cities trailing behind in 2nd and 3rd place, it was the smaller cities like Bendigo (second) and Wodonga (third).

City with the Most Vegan Searches – Sydney

Looks like those in Sydney are craving a bit of the vegan treatment that the Sunshine Coast has been getting. Sydney landed the top spot for most searchers around veganism. Along with Melbourne and Brisbane, Sydney and Australia’s other big cities appear to have the largest vegan population.

City with the Most Interest in Vegan Products – Sydney

Even though the Sunshine Coast is coming in with an abundance of vegan options, bigger cities like Sydney are still taking the title of highest vegan population. More than ¾ of our Vegan product search traffic comes out of Sydney, Brisbane and Melbourne.

We scored Australia’s 20 biggest cities out of ten for the following factors to get an average score for each city. We used population data from the Australian Bureau of Statistics’ population estimates by Significant Urban Area, 2009 to 2019.

Both sourced from Tripadvisor.

The percentage of traffic participation by Australia’s cities and regions on our vegan product pages over the past twelve months.

Check these out next:

Discover our juiciest and most refreshing plant-based protein powder.

We're proud to be the World's first plastic neutral sports nutrition brand, achieved through our partnership with rePurpose Global.

Find out how we're miniming our impact on the planet with FSC certified packaging.

Jenessa graduated with a degree in Fashion Marketing & Branding from Nottingham Trent University, where she conducted a year-long research study on the evolution of health and wellness. She's followed a plant-based diet for several years, and believes in making healthy and sustainable lifestyles approachable and accessible for all - no matter one's background or budget. In Jenessa's spare time, you'll catch her enjoying the odd spot of yoga, getting creative in the kitchen, and trying out the latest plant-based launches.

What Are The Best Vegan Omega-3 Sources?

Giving Back To The Community

Getting to know Zanna Van Dijk | Meet the Ambassadors